After 1918 the British governments overestimated the strength of the French Army and feared a French domination of Europe. The consequence of this wrong evaluation was the absence of appropriate common Anglo-French reactions to Hitler’s initiatives till the invasion of Poland.

" The mightiest land force in the world to-day, the queen of battles, the infantry of France ! " (British point of view, 1939 : http://www.britishpathe.com/video/french-national-fete)

Occupation of the Ruhr by French and Belgian troops (1923-1925) : no British support

Poincaré decided to occupy the Ruhr on 11 January 1923 to extract the reparations himself. The real issue during the Ruhrkampf (Ruhr struggle) was not the German defaults on coal and timber deliveries but the sanctity of the Versailles treaty. Poincaré often argued to the British that letting the Germans defy Versailles in regards to the reparations would create a precedent that would lead to the Germans dismantling the rest of the Versailles treaty. Finally, Poincaré argued that once the chains that had bound Germany in Versailles were destroyed, it was inevitable that Germany would plunge the world into another world war.
When on 12 July 1922, Germany demanded a moratorium on reparation payments, tension developed between the French government of Raymond Poincaré and the Coalition government of David Lloyd George. The British Labour Party demanded peace and denounced Lloyd George as a troublemaker. It saw Germany as the martyr of the postwar period and France as vengeful and the principal threat to peace in Europe. The tension between France and Britain peaked during a conference in Paris in early 1923, by which time the coalition led by Lloyd George had been replaced by the Conservatives. The Labour Party opposed the occupation of the Ruhr throughout 1923, which it rejected as French imperialism. The British Labour Party believed it had won when Poincaré accepted the Dawes Plan in 1924.
http://en.wikipedia.org/wiki/Occupation_of_the_Ruhr

Consequence : in 1936, when Hitler remilitarizes the Rhineland, the French do not react

Not long after dawn on March 7, 1936, nineteen German infantry battalions and a handful of planes entered the Rhineland. By doing so, Germany violated Articles 42 and 43 of the Treaty of Versailles and Articles 1 and 2 of the Treaty of Locarno. They reached the river Rhine by 11:00 a.m. and then three battalions crossed to the west bank of the Rhine.
Heinz Guderian, interviewed by French officers after the Second World War, claimed: "If you French had intervened in the Rhineland in 1936 we should have been sunk and Hitler would have fallen." The general staff considered Hitler's action suicidal. Hitler himself said :
« The forty-eight hours after the march into the Rhineland were the most nerve-racking in my life. If the French had then marched into the Rhineland we would have had to withdraw with our tails between our legs, for the military resources at our disposal would have been wholly inadequate for even a moderate resistance. »
The reaction in Britain was mixed, but they did not generally regard the remilitarization as harmful. Lord Lothian famously said it was no more than the Germans walking into their own backyard. In his diary entry for 23 March, Harold Nicolson MP noted that "the feeling in the House [of Commons] is terribly pro-German, which means afraid of war". During the Rhineland crisis of 1936, no public meetings or rallies were held anywhere in protest at the remilitarization of the Rhineland, and instead there were several "peace" rallies where it was demanded that Britain not use war to resolve the crisis.
http://en.wikipedia.org/wiki/Remilitari ... _Rhineland 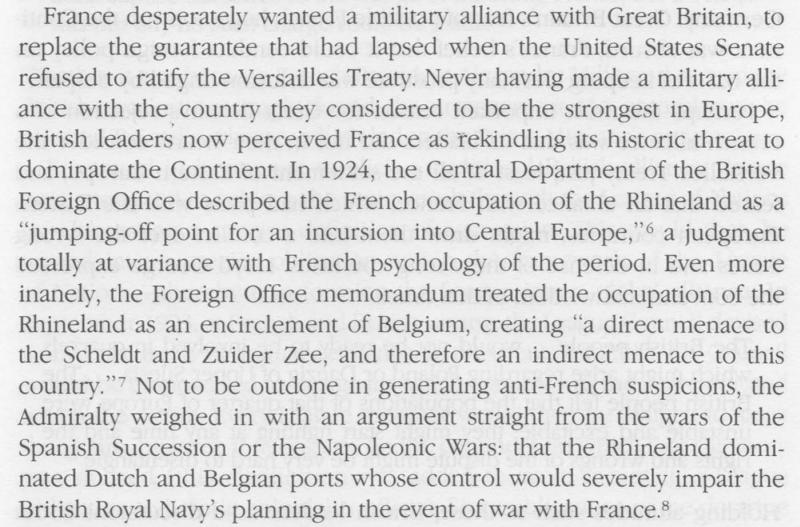